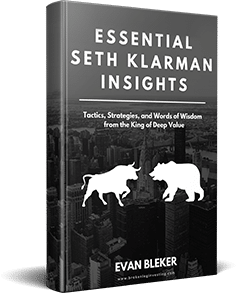 It’s a great quote first popularized by Benjamin Graham… but what does it actually mean?

Seth Klarman might have some answers. In 1999, faced with a rapidly changing market environment, he wrote an article for Barron’s sketching the essence of what it means to be a value investor. As you’re about to see, Klarman’s thoughts both help explain Graham’s quote and are a great guide to today’s markets.

As value investors, we know that the stock market is so fickle, it’s impossible for anyone to predict what it will do next. The only thing we can expect in terms of growth, profits, or market price is that they will be pulled back to the average over time. As Klarman explains below, this is hugely important.

In his article, Klarman distills the essence of value investing through the story of Warren Buffett — Oracle of Omaha — facing the 1973/74 bear market head on.

That’s an enormous drop, and a decline in value that would rattle most investors — but not Buffett.

“Roger Lowenstein, in his biography Buffett, describes the impression of Buffett sweeping down the aisles of a giant store (buying stock)…. As the market fell, he raced down the aisles all the faster.”

As the market continued to decline, what was already a bargain before became an ever better bargain. But it took the right mindset to see it. Buffett took advantage of the buying opportunity, calling it a reverse of emotions — being greedy when others are fearful and being fearful when others are greedy. Why was he so confident?

Value Investors: Stick To Your Margin Of Safety

Klarman believes that if Buffett had allowed himself to worry about his interim losses in 1974 (when the American economy decelerated from 7.2% real GDP growth to a −2.1% contraction while inflation [by CPI] jumped from 3.4% in 1972 to 12.3%), he too might’ve panicked and been removed from his position, losing out on several great investment opportunities.

“That he didn’t reflects the well-founded conviction a value investor is able to have, confident in his margin of safety that a bargain price is able to confer.”

He did what everyone else didn’t: he remained steadfast. Instead of disposing his shares when the market started to spiral downward, he took advantage of the crisis and bought more stocks. He remained optimistic that the market would recover over time.

Most investors are looking to make money quickly — whether in a month or a year. Many investors think that flat or negative results over a year's time mean failure. But when Buffett bought the Washington Post, he wasn’t looking to make an instant financial gain. Despite the uncertainty due to the market crash, he didn’t worry himself over the short-term-oriented risks of his investment. According to Klarman:

“It is helpful to note that Buffett did not consider whether Washington Post was a component of a stock market index, or about to be added to one… He did not weigh the market capitalization of the company or its daily trading volume in his purchase decision. He didn’t worry about whether the stock was about to split or pay or omit a dividend. He most certainly did not evaluate the stock’s beta or use the capital-asset pricing model or consider whether its purchase would move his portfolio to the efficient frontier. He simply valued the business and bought a piece of it at a sizable discount.”

Value investors should always look for significantly discounted quality stocks. There are plenty of great companies in the market today whose stocks sell for less than their actual value. These are often foreign firms or companies with tiny market caps — but they offer tremendous buying opportunities. Don’t worry about where the company is today, because the market will come around eventually and price it right. That’s what value investing is all about.

We’re not likely to find another Washington Post anytime soon. Mark Twain once wrote that history doesn’t repeat, but it does rhyme. Klarman would agree. One valuable lesson Klarman shares with value investors in his article is that history doesn’t repeat itself. No two things can happen exactly in the same time or manner, especially when it comes to the stock market.

“History never repeats itself exactly. So in 1998, investors urgently seeking liquidity are selling not Washington Post but small-cap and emerging-market equities.”

When you base an investment decision on a historical event, you are not guaranteed the same outcome, but by using the same principles we learned from these historical events, we can successfully navigate new situations.

Take the dot-com or internet bubble, for instance. Dot-coms (or internet-based companies) were launched in the late ’90s when the internet became more accessible and increasingly important to people. Investors were immediately hooked on dot-coms and soon, they developed an unrealistic expectation that the future of e-commerce was going to be worth millions.

Unfortunately, very few dot-coms were successful. Since valuations were based on mere eyeballs instead of quantitative data and basic fundamental stock analysis, it wasn’t long before stock values began to skyrocket — some even doubling on the first day.

“Consider the Internet-stock mania, where the mere rumor of a stock split, as irrelevant to value as a rumor could be, sends not only that stock flying but a whole group of stocks rising in sympathy.”

History (and logic!) tells us that a stock split is fairly meaningless, but that has not stopped investors from acting irrationally when they sense “market action.” As the price of a split company rose, its peers would follow in sympathy as investors anticipated a spread of this so-called “market action.”

How should intelligent value investors have handled that situation?

Today, most investors spend money on large and expensive Western tech companies. While different from the late 1990s internet bubble, Twain was right that history does indeed rhyme.

Non-Western markets and tiny deep value companies, on the other hand, are being ignored despite their potential. Many investors today prefer to buy expensive shares of great companies such as Google or Coca-Cola, and although these companies may seem like a great investment given their track record, what investors don’t realize is that there is little margin of safety left in these investments. It’s the gap between price and value that determines your return.

Always keep an eye out for good opportunities. As value investors, we should always remember that price is what you pay and value is what you get.

Buy Stocks Based On Value

And value is always the key factor in successful investing. It’s critically important to recognize that. But some people buy or hold stocks for different reasons. Klarman described another kind of investor who likes to hold on to a stock for sentimental reasons.

“Investors tired of underperforming don’t sell Dell Computer (no one, it seems, sells Dell), which they love for what it has done for them no matter how expensive it has become.”

Choose stocks based on value, not sentiment. Value investors need to think more objectively when it comes to buying and keeping stocks. When you know that the fundamentals are going down and will likely destroy your margin of safety, the best thing to do is to walk away and find new investment opportunities to explore. There’s a lot of deep value international companies out there just waiting to be discovered.

Everyone Else Is Simply Wrong

“Thus an investor must have more confidence in his or her own opinion than in the combined weight of all other opinions. This borders on arrogance, the necessary arrogance that is required to make investment decisions.”

Good value investors are not afraid to go against the tide when they know they are right. This is the key definite feature of value investing. When stock prices fall, most investors start to panic thinking they made a bad investment and in their panic, they start selling shares even though they are likely to end up with big losses.

A value investor knows that the stock has already crashed and, due to his solid assessment of the firm’s stable value, is confident that it will bounce back again. Instead of following what the market dictates and running for the hills, he investigates the company’s situation and makes his own assessment so that when stock prices start to fall and become deeply undervalued, like Buffett, he will reckon that the market is wrong.

In The Short Term The Market Is A Voting Machine, Not A Weighing Machine

And this really highlights one key attitude successful investors have to have towards the market. According to Klarman, there’s a big difference between short-term and long-term investing.

“At the root of investing is the belief, first espoused by Benjamin Graham, that the market is a voting machine and not a weighing machine.”

When you buy cheap stocks, you have less chance of losing money on your investment. Short-term investors usually make impulsive decisions, doing what everyone else is doing and going where everyone else is going. Long-term investors, on the other hand, make decisions based on a strong fundamental knowledge of the company. They take their time in learning the business and growing their investments, always keeping an eye on the distant future.

Klarman reminds us that as value investors, we shouldn’t be afraid to be different. We need to trust and invest in our own abilities, to stick to what we know and avoid investing in businesses we don’t fully understand. As value investors, we should always keep an eye out for great opportunities, for they don’t come knocking twice. Patience is key — take the time to watch your investments grow.

Enter your email address below because we’ll send you inside info on the best performing deep value investing strategies today PLUS a free copy of The Broken Leg Investment Letter.

Get the guide
comments powered by Disqus 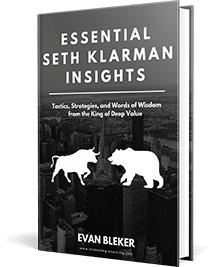